When in London, visiting the West End or the National Theatre to see a show is one of the things everyone wants to experience. However, when you actually do so there are some drawbacks people tend to not tell you about – the expense, the crowds, a long journey and aching feet.

Rural Arts, a local arts charity based in Thirsk, have recently installed technology that streams performances live from the National Theatre in London directly to their venue. Residents will have the opportunity to witness actors and actresses such as Dame Judy Dench, Dominic West and Benedict Cumberbatch perform live in critically acclaimed productions. 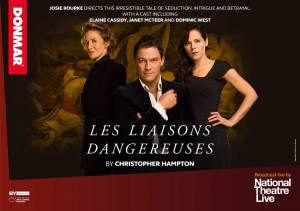 Former Lovers compete in games of seduction and revenge. While these aristocrats toy with others’ hearts and reputations, their own may prove more fragile than they supposed.

“Live streaming is always something we have wanted to do at our venue, being able to work with the National Theatre and to bring their high quality performances digitally to our Courtroom is a joy for us” says ON Tour Manager Sophie Backhouse.

The Evening Standard has heaped praise on the show, calling it ‘Theatre at its most seductive… West proves superb, McTeer makes a triumphant return to the West End’