A brand new theatre show, featuring an exciting twist for food-lovers, is coming to the region as part of Rural Arts highly successful ON Tour scheme.

In the first week in February, an innovative new theatre performance, The Chef Show, is coming to venues in North Yorkshire and East Cleveland. Part- play, part-cookery demonstration, the laugh-out-loud action focuses on the relationship between a father and son, who together run their rural village’s local Indian restaurant, and their differing opinions on the future of their beloved business. The production also brings the mouth-watering smells and tastes of the restaurant to life with a real-life cookery demonstration from a guest chef from each venue’s local Indian. The chefs will spare their own experiences running a restaurant, along with some tasty samples for you to try!

Critics have been quick to the praise The Chef Show, with The Stage calling it “a compelling mix of cooking, curry, comedy and community”, while The British Theatre Guide labelled it “a deliciously funny and occasionally dramatically-daring concoction.” 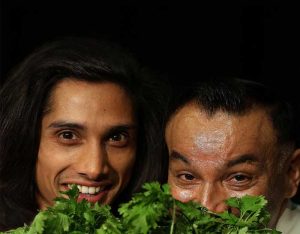 “We are absolutely thrilled to present the The Chef Show as part of ON Tour’s 2017 Spring programme ” says Erica Morris, ON Tour Manager. “Not only does the show have a fun, fast-moving script from a Yorkshire writer, Nick Ahad, and brilliantly observed, comic performances from the cast, but the inclusion of live cooking makes it a theatre show that is truly unique– I can’t wait to see it again!”

The Chef Show is touring to venues in the region thanks to its inclusion in the ON Tour scheme, which is run by Thirsk-based arts charity Rural Arts. Established in 1999, ON Tour works to bring high-quality performances to community venues across North Yorkshire and East Cleveland. Renowned theatre companies including West Yorkshire Playhouse, Farnham Maltings and Pentabus Productions have all previously toured productions as part of ON Tour.

The Chef Show will be at Saltburn Arts Centre on Thu 2 February,